.. is over. We have just finished the 2.5 hour Question and Answer session with DC, PCF and journalists from all over Europe. We also gave Vo0 a sneaky chance to ask his #1 question to PCF about the strength of the Stakegun. A question thats been on a lot of peoples lips for a LOOONG time. Below is an excerpt from the discussion with the whole log linked either here, or viewing at eslive here (thanks SwaT).

[TVG]Chris]: With recent AAA titles such as Half-Life 2 and Halo 2, how difficult has it been to continue marketing Painkiller to an oversaturated market?

[DC]Simon]: I think it all comes down to the product and the community that goes with it. HL2 and H2 quite started on the same foot as we did, gaining much respect through their flawless solo campaigns and continue selling with MP support. So all in all, 2004 will probably be best known as the FPS year, and you

[DC]Simon]: but you do know what happens to giants in PK… 🙂

Thanks to all those who joined us. Especially to Simon and Tiphaine from DreamCatchers, and Andrew from People Can Fly.

Starting off with sakh from EYEballers, last week it was Stermy from Play.it who we interviewd. Today its the very well known zyz from SK-Gaming who we asked a few interesting questions. zyz played Quake3 for the german Q3 topclan Unmatched previously. He then switched to Doom3 and teamed up with SK-Gaming and now after the announcement that Painkiller will be the World Tour Game, he is playing Painkiller with his Teammates SteLam, neok and gitz

The full interview is here > http://www.team-dignitas.com/news.php?newsid=756

The CPL have modified their original announcement we bought to you recently. It now seems that the 3 new maps being developed by Ritual Entertainment will be made available for playtest by the 29th rather than just released. This is probably a good thing as huge numbers of testers can only make the maps better (assuming they listen to the people who know what they are talking about 😉 ). 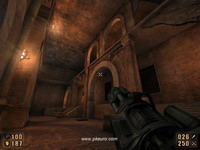